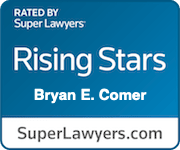 A Mobile-area native, Bryan Comer and his family have close ties to the local community. In his role as a Partner at Tobias & Comer Law, LLC, he helps lead the firm’s practice with nearly two decades of litigation experience focused on wrongful death, trucking accidents, products liability, class actions, medical negligence, and personal injury.

Rated AV Preeminent® by his peers on Martindale-Hubbell, Bryan has been recognized as earning the highest rating of legal skills and ethics. Bryan was also selected to the Super Lawyers Mid-South Rising Stars list for the years 2014 through 2020 by Thompson Reuters, an exclusive list, recognizing no more than 2.5 percent of attorneys.

Bryan and his wife, Megan Brooks Comer, have a young daughter and son, and enjoy spending time on the water along the Gulf Coast.

Alabama Board of Bar Commissioners

Drug Education Council
Board of Directors