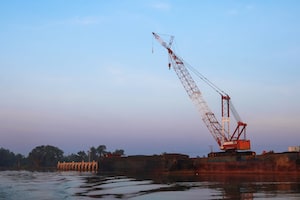 In June 2014, John Williams was injured in a crane accident at his job at VT Halter Marine in Pascagoula, Mississippi. John had been a crane operator for over 40 years. John had the respect of his co-workers as a “by the book” crane operator, who they affectionately referred to as “Preacher.”

Manitowoc Crane Company has made cranes for over 100 years. Manitowoc manufactured the crane John operated, a 16000-series crawler crane. Crawler cranes are big, and John’s was no different. The crane has a 400-ton lifting capacity and moves around on tracks, much like a tank. John used the Manitowoc 16000 crawler crane to move pieces of ships as they were being built at VT Halter.

On June 25, 2014, John was using his 16000 crane to lift a bow section of ship along with another operator in another 16000 crane, a procedure the 16000 was designed to perform. The two cranes separated during the lift, and the other crane pulled John’s 16000 forward, causing the counterweights to fall toward, and into, John’s cab. The impact of the counterweights propelled John to the concrete 8 feet below his cab, causing horrible, permanent injuries, including a traumatic brain injury, a crushed skull, a shattered hip, and it rendered him blind.

The Mobile, Alabama defective product lawyers at Tobias & Comer Law, LLC were hired shortly after the terrible incident, allowing us to move quickly, preserving evidence and gathering facts that would become essential in the upcoming case. Tobias & Comer Law, LLC’s lawyers filed the lawsuit pursuant to Mississippi’s Product Liability Act in federal court in Gulfport, Mississippi, which began a four-year battle with the crane company and its lawyers. Tobias & Comer Law, LLC’s lawyers took over 40 depositions of a wide range of witnesses: from workers at the shipyard, to expert witnesses, to crane company representatives, and John’s medical providers. 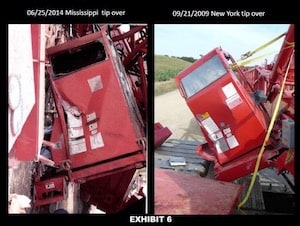 After the discovery process ended, Tobias & Comer Law, LLC’s lawyers handled extensive legal research and briefing on various legal issues and, ultimately tried the case over 8 days in federal court. The evidence conclusively established that Manitowoc Cranes knew the counterweights would fall if the crane tipped forward, and it failed to warn operators, like John, of the danger. One of the key pieces of evidence at trial was a photograph from another 16000 that tipped forward in New York, causing almost identical damage to the operator cab as the cab in John’s 16000.

At the conclusion of the trial, the jury returned a verdict for John and his wife, Wanda, for $3.4 million.

The crane company appealed the case to the 5th Circuit Court of Appeals in New Orleans, Louisiana. Tobias & Comer Law, LLC filed a detailed appellate brief and argued in oral arguments to the 5th Circuit. The Court unanimously upheld the verdict, and Tobias & Comer Law, LLC’s lawyers collected on the full judgment, obtaining justice, answers, and resolution for Wanda and John Williams. Read the Full Verdict