In the fall of 2009, Sarah Anderson was a student at Auburn University and a member of the Auburn marching band. A native of Robertsdale, Alabama, Sarah was a joy to all who had the pleasure of getting to know her. On the evening of November 10, 2009, Sarah and a friend from school were traveling on I-85 headed to Montgomery to get something to eat. What happened next was tragic, and it led her family down a long road to find answers. Fortunately, the family retained the services of Mobile, Alabama trucking accident lawyers Tobias & Comer Law, LLC, who exhaustively investigated the accident and were able to bring closure.

Here is the account of the two year-long case:

Sarah was driving in the rain on I-85 headed to Montgomery, when she hit a rut in the road that was filled with water, which caused her vehicle to hydroplane. Sarah lost control of the vehicle, causing the car to spin and flip multiple times, coming to a rest on the roof over the outer line of the left-hand lane of travel. The force of the wreck caused Sarah’s friend to lose consciousness. Sarah recognized the perilous condition in which she found herself, so she climbed out of her car and, using a flashlight, warned oncoming traffic of the wrecked vehicle.

Sarah’s flashlight caught the eye of a long-haul truck driver from South Carolina who was approaching the wrecked car. The truck driver saw Sarah, and he changed lanes to avoid colliding with the car. Following too closely behind the truck driver was another 18-wheeler, who was driving for the Hunte Corporation, a company from Missouri that bred dogs to sell at pet shops across the country. The Hunte driver was not paying attention when the lead truck changed lanes. The Hunte driver never saw Sarah, and he struck the rear of her vehicle, killing Sarah.

After the impact, Sarah’s body was found in the median, and her friend was found unconscious, but alive, in the front seat of the vehicle. The Hunte driver did not see what happened since he was not paying attention, so the accident report incorrectly stated that Sarah had been ejected when the car hydroplaned and rolled over. Her family did not believe the account in the accident report because Sarah always wore her seatbelt.

This is when the Mobile, Alabama trucking accident lawyers of Tobias & Comer Law, LLC began to investigate the crash and determine what happened. Over the ensuing months, Bryan Comer and Desi Tobias set off on a fact-finding mission that entailed many of the same tools seen on criminal investigative television shows.

The experienced trucking accident lawyers of Tobias & Comer Law, LLC examined the data recorded by Sarah’s car’s “black box,” which provided critical evidence including that Sarah was wearing her seatbelt, and that the airbags did not deploy until the vehicle was struck by the commercial truck. The firm retained experts who performed DNA analysis on blood found on the airbags. The firm retained a forensic pathologist who performed a detailed analysis establishing that Sarah’s lack of certain injuries showed she was not ejected when the car hydroplaned and rolled over, but rather was killed when her vehicle was hit by the 18-wheeler. Finally, the firm retained an accident reconstructionist who established key elements of the sequence of the wreck, coupled with all of the newly discovered evidence. Tobias & Comer Law, LLC was also able to locate the first truck driver in rural South Carolina and flew there to obtain a statement from him. The driver confirmed that the girl he saw warning him with her flashlight was Sarah. 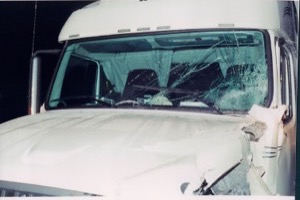 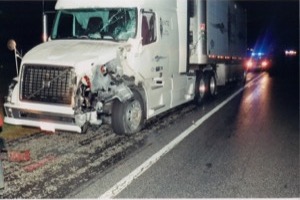 Actual photos taken at the scene of the accident on November 10, 2009.

Tobias & Comer Law, LLC sued Hunte in a wrongful death lawsuit due to its driver’s negligence as well as for failing to ensure that its drivers were trained and required to keep a proper lookout, as required by the Rules of the Road. The case was litigated in Federal Court in the Middle District of Alabama in Montgomery and was hard-fought over the next 2 years. Tobias & Comer Law, LLC took depositions, filed extensive briefings on complicated legal issues, and argued in hearings in front of the Court.

After litigating the case for 2 years, Tobias & Comer Law, LLC was able to settle the case on behalf of Sarah’s estate for her wrongful death. More importantly, however, Bryan Comer and Desi Tobias were able to set the record straight on how Sarah died – so much so, that the official accident report was changed to reflect what happened. After the case, Sarah's parents wrote to the law firm of their heartfelt gratitude, saying, "This is to honor the man responsible for finding out the truth about our daughter's death, Bryan Comer. He worked diligently and determinedly to bring to light what happened. We are appreciative to him for exposing the truth about what caused her death and thereby allowing closure for our family."

If you or a loved one have been injured or killed by a commercial truck or 18-wheeler, let the wrongful death lawyers at Tobias & Comer Law, LLC work for you. Call for a free consultation 251-432-5001 or contact us online.